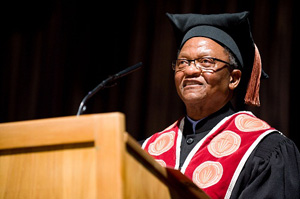 To cap it all: Prof Njabulo Ndebele has been inaugurated as chancellor of the University of Johannesburg.

Former UCT vice-chancellor Professor Njabulo Ndebele has been appointed as chancellor of the University of Johannesburg (UJ).

Ndebele, who was inaugurated on 16 November, took over from businesswoman Wendy Luhabe, who had served as the newly-created university's first chancellor since 2006. UJ hailed Ndebele for his contributions to higher education in South Africa and beyond.

"In Professor Ndebele, we have found someone with exceptional leadership qualities and a demonstrated commitment to values such as equity, diversity, economic development and corporate citizenship that are so important to us," said Professor Roy Marcus, chairperson of the UJ council. "We see him as a leader who will assist UJ in moving forward to the next plateau of excellence in teaching, research, community outreach and innovation.

"He is someone with proven success in bringing about partnerships with the government and industry, and someone who can help further our standing as a premier African city university."

The appointment is not Ndebele's first honour from a South African university this year. In April, the Durban University of Technology presented him with an honorary Doctorate of Technology Degree in Arts and Design for his contributions to education, literature and public service.

Ndebele served as UCT vice-chancellor and principal from 2000 to 2008.