What does Africa month mean to the UCT community?

On the eve of Africa Month in May, Deputy Vice-Chancellor Professor Thandabantu Nhlapo urges members of the university community to celebrate together and to use the next four weeks to reflect on the ways in which UCT can continue to use its human, intellectual and material resources to give expression to its Afropolitan vision.

"There are good reasons for celebrating Africa Month. Africa is the continent on which we are situated, with which we feel a sense of kinship and whose histories and problems are inseparable from ours.

As a university community, the more immediate reasons are academic and social. In pursuing our core business of teaching and learning, and research, we have the capacity to directly address the legacy of the histories mentioned above and do something tangible about the problems. But in doing so, we also have the obligation to put in some work towards improving the institutional culture of our university.

The greatest outcome of the extended Africa Month celebrations in 2012 was the overwhelmingly positive response from staff and students who said that in that period they could see themselves reflected in the mainstream culture of UCT. It did not matter whether this was in the form of the increased visibility of cultural symbols or attending a lecture on their currency or religion or home region, or hearing their language spoken; the verdict was the same.

I would like to think that this coming Africa Month can build on the accomplishments of 2012 - when UCT succeeded in combining the scholarly with the cultural in the exuberant celebration of our African identities. Africa Month in 2013 will be about maintaining this momentum, highlighting aspects of identity that at are once personal and institutional; academic and cultural.

This year will feature an expanded programme of events and activities, resulting from an increase in the scholarly work with an African focus that is conducted at UCT.

Notably, there will also be stronger student participation; in addition to a Plaza event, both the SRC and its Societies will be rolling out round-table discussions and seminars.

The year 2013 is significant because it marks the 50th anniversary of African Unity (in the form of the OAU, established in 1963, and its successor, the African Union) and gives us the opportunity to reflect on the role of these organisations in ushering in the changes and developments that many Africans are seeing today.

At its best, Africa Month should be an opportunity to flesh out the framework we call the Afropolitan vision - in many weird and wonderful ways. If we do it properly, we will be left in no doubt that we are good continental citizens in both our scholarly outputs and in our hearts. At that point it will begin to dawn on us, I hope, not only that every month can be Africa Month at UCT, but also that Afropolitanism has become embedded in our culture." 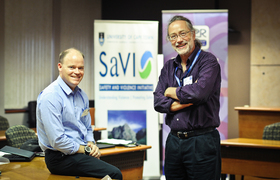