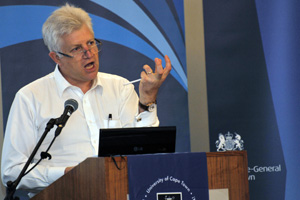 The week-long meeting was hosted by UCT's Graduate School of Development Policy and Practice (GSD), in collaboration with National Treasury's Technical Assistance Unit and the Economies of Regions Learning Network (ERLN), a collaborative effort between the Gauteng, KwaZulu-Natal and Western Cape economic regions.

It was the latest in a series of executive short courses presented by GSD following on from the programme run by visiting scholars Professors Francis Fukuyama and Roger Leeds late last year, and the training on local government leadership for the eight metros in March.

Regional economic development - the sustained, concerted actions of policymakers, businesses and communities to promote economic health - is increasingly recognised as a critical area of intervention worldwide.

In South Africa, however, this has been a neglected area. That is until ERLN, which has partnered with the GSD, prioritised it to raise living standards and create more employment.

"The course contributes to this by setting up a dialogue, between leading international and national thought leaders in the field and local public and private sector leaders, to reflect on local and global practice and how regional economic development capabilities can be built in South Africa."

Alan Hirsch noted that courses like this benefit economic development by building multi-stakeholder teams with a common vision of development, teams that can drive processes forward in their regions.