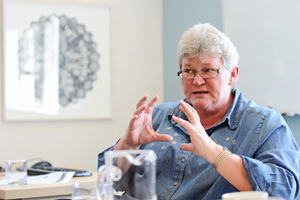 International acclaim: Prof Di McIntyre has been named as a foreign associate to the US's IOM.

UCT's Professor Di McIntyre has been named as a foreign associate to the Institute of Medicine (IOM), the health arm of the US's National Academy of Sciences.

McIntyre was one of 10 foreign associates and 70 new members elected to the IOM - considered a national resource for independent, scientifically-informed analysis and recommendations on health issues - at its 42nd annual meeting, held in October. Election to the IOM is considered one of the highest honours in the fields of health and medicine, and recognises individuals who have demonstrated outstanding professional achievement and commitment to service.

On their election to the IOM, members make a commitment to volunteer their service on IOM committees, boards, and other activities.

McIntyre, based at UCT's Health Economics Unit (HEU) in the School of Public Health and Family Medicine, holds the national research chair in health and wealth under the South African Research Chairs Initiative, aka SARChI. She founded the HEU in 1990, and led the unit as director for 13 years.

She has served and continues to serve on numerous ministerial and policy committees, including the Ministerial Advisory Committee on National Health Insurance. She has been hailed for her work in healthcare financing.

"This nomination acknowledges the impact that Professor McIntyre's academic achievements and leadership in health economics have had in the pursuit of health equity in South Africa, on the African continent, and throughout the global South," commented Professor Marian Jacobs, outgoing dean of the Faculty of Health Sciences.