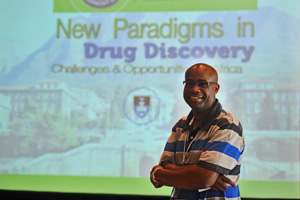 The very first H3-D Symposium was a meeting of scientific minds from Africa and other parts of the world, with the aim to find solutions to African health problems.

The theme of the symposium - hosted by UCT's Drug Discovery & Development Centre - was New Paradigms in Drug Discovery. Discussions and lectures at the symposium centred on malaria, tuberculosis and cardiovascular disease, which are prevalent in Africa.

Proceedings were opened by the minister of science and technology, Derek Hanekom.

"Modern pharmaceutical industry-integrated drug discovery is not well established on the African continent, so this symposium provides a unique opportunity to inspire researchers to realise the potential for collaboration in integrated drug discovery," commented Professor Kelly Chibale, H3-D director and chair of the symposium "It also aimed to show delegates how to harness modern pharmaceutical industry skills and expertise in the drug-discovery value chain - integrating medicinal chemistry, biology and pharmacology, as well as drug metabolism and pharmacokinetics studies. Together, this will create a critical mass of African scientists with the capabilities of developing pre-clinical drug candidates, with a unique focus on the diseases afflicting sub-Saharan Africa."

A highlight was an appearance by Yvonne Chaka Chaka, popular entertainer and UNICEF Special Ambassador on Malaria in Eastern and Southern Africa, who spoke and performed at the symposium dinner.