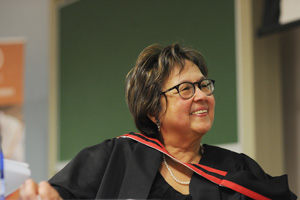 Her valedictory lecture, titled Of Care and the Unconventional: The retiree's oath, gave retiring Professor Marian Jacobs an opportunity to thank the many people and institutions who'd shaped her career and life.

These include (according to her list) her family, her patients, her students, her academic and clinical teachers, her parents (her mother was one of her teachers, her father the school principal), writer Richard Rive (who was another of her school- teachers), the unsung nurses she studied under at Somerset Hospital, countless community, health and political organisations, and a whole school of "informal teachers".

"All these informal teachers - outside the wall of the academy - taught me life lessons that have been foundational in my understanding of the world, education, and the political economy of health - an understanding that has also supported my own practice as a teacher and doctor."

It framed her work at UCT, where she had to negotiate the middle ground between the values of the oath taken in the faculty's graduating year, "as a community of colleagues, teachers and students", and the system of direct accounting used in performance management at the university. In establishing the master's programme in maternal and child health, for example, the faculty adopted some very unconventional practices (students became teachers, and teachers became learners), Jacobs recounted.

Similarly, the Children's Institute, which she as director had a key role in setting up, had purposely aimed to produce research accessible not just to fellow academics, but specifically to policymakers and the public.

Jacobs reserved her penultimate farewell for her students. "You are the reason I took the Dean's job," she told them.