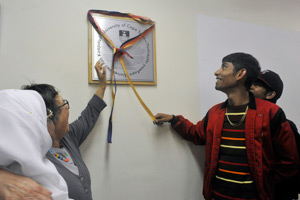 Conference room three in the Barnard Fuller building on UCT's medical school campus will from now on be known as the Aadil Moerat Room.

The room will serve as a memorial to Moerat, a UCT graduate who became known as the "people's doctor" in Guguletu, where he served the community before his untimely death in 1998. The renaming ceremony, held on 3 October, was attended by Moerat's family, fellow students and members of the Faculty of Health Sciences.

Moerat's eldest son Danyal Moerat (17) found the fond recollections of his father's life and contribution to the community helpful, in that he learnt "more about him, which helped me understand him more".

The renaming forms part of the health science's centenary celebration and follows on two other rooms in the Barnard Fuller building being named after Frances Ames and Jeff Dumo Baqwa, respectively.

Dean of health sciences, Professor Marian Jacobs, expressed her hope that the undergraduate students, the main users of the AadilMoerat room, will emulate him in his "dedication and selfless service to society".

Devastation as historic UCT buildings gutted by runaway fire Several UCT buildings have been gutted by an inferno which started on the slopes of Devil’s Peak on Sunday. 19 Apr 2021