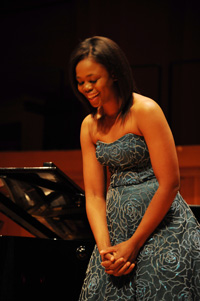 Top of her game: Alumna Pretty Yende was a surprise guest at the first night of the annual VC Concert.

No one would dispute that alumna Pretty Yende is among UCT's most valuable jewels.

The international, multi-award winning soprano, with Tertia Visser Downie as an accompanist, received rave reviews and a standing ovation when she wowed the crowd with Vincenzo Bellini's Qui la voce from I puritani, this as a surprise guest at the opening night the annual Vice-Chancellor's Concert at the Baxter Theatre Centre on 23 August.

Vice-Chancellor Dr Max Price noted in his welcome address that stories such as Yende's - of students from South Africa's rural and township communities going on to conquer the world - are "mind-blowing".

Price said he was "struck" by the valuable role the SACM plays in the transformation process at UCT.

At the event, designed to celebrate Women's Month at the university and to pay tribute to its staff and SACM achievements, the UCT Brass Ensemble, presented by William Haubrich opened the account, followed by Francois du Toit and pianist Franklin Larey.

Then Tenor Levy Sekgapane and soprano Lynelle Kenned (who doubled up as a presenter) showed why SACM is the leader in its field.

After the interval, Dizu Plaatjies and his troupe of traditional drummers and dancers saturated the concert hall with their rhythms and energy, before the concert ended on the high with a blast from the UCT Big Band, directed by the effervescent Professor Mike Campbell.