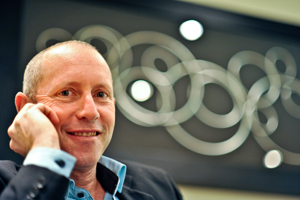 Back in the fray: Prof Wayne Derman is heading for his second Paralympics, an event he's developed a personal and medical passion for over the years.

He's no stranger to the pinnacle of world sport, but for UCT's Professor Wayne Derman the Paralympic Games represents a unique and rewarding challenge.

Derman, professor of sports medicine with the UCT/Medical Research Council Research Unit for Exercise Science and Sport & Exercise Medicine, has been selected as the chief medical officer for the South African team heading for the London 2012 Paralympics in August. The medical team, which will administer to a squad of 63 athletes and 50 officials, is made up of two medical doctors and eight physiotherapists, the latter including a 'classifier' who makes sure that South Africa and other countries field the right athletes for the right events.

Having held similar positions for the national Olympic teams that went to Sydney 2000 and Athens 2004, as well for the Paralympic team of Beijing 2008, Derman is well prepared for the task that awaits him.

That said, he expects less tricky medical hurdles in England than he encountered in Beijing and Down Under, where dense air pollution and allergenic trees were respective obstacles. For one thing, London is in the same time-zone as South Africa, which makes travelling theoretically easier. Also, the city is less of a culture shock and the Paralympians have been competing there and elsewhere in Europe quite regularly.

"I'm actually looking forward to London possibly being one of the 'less challenging' of the travel challenges," Derman says.

He is confident that the group he describes as "arguably South Africa's most successful team" can return with a big medal haul.

Not that the group does not come with its challenges. Keeping a large squad of athletes with a range of medical conditions fighting fit will keep Derman and the rest of his own team on their toes.

But he revels in the sterling test of his clinical skills that leading a medical team for athletes with different needs demands. Now a dedicated Paralympian fan, the event offers a unique attraction, he says.

"It allows me the opportunity for self-reflection. I think you come to terms with your own disabilities and limitations."