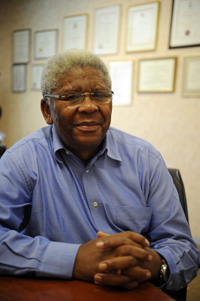 Wall of fame: Following his honorary doctorate from Wits University, Archbishop Njongonkulu Ndungane will have another plaque to line his office wall.

Completing a recent hat trick of honorary degrees for UCT, Archbishop Njongonkulu Ndungane, who until 30 June served as chair of UCT Council, has received an Honorary Doctorate of Literature from the University of the Witwatersrand.

Ndungane's degree follows on similar honours bestowed on Professor Etienne van Heerden, fêted by the University of the Free State, and deputy vice-chancellor Professor Thandabantu Nhlapo, who was awarded an honorary doctorate by his alma mater Glasgow University.

At Wits' graduation ceremony on 22 June, Ndungane was hailed for his theological contributions, his role in campaigns to abolish Third World debt, his involvement in championing African development, and his part in situating "the Church as a place of compassion, humanity and a fierce advocate for justice in our world".

"I am cognisant of the fact that it is has been bestowed on me by this prestigious academic institution, and want you to know that I will carry it with both pride and humility," Ndungane said at the Wits occasion. "Pride, that you should see fit to recognise me in this way, but also humility in acknowledgement that there is much work still to be done to achieve a society of which we can all be proud."