ID why it's upsetting, and talk about it, panel says. 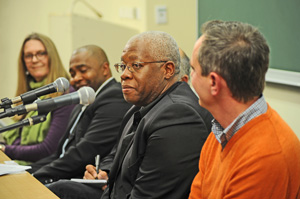 One wouldn't think that it's often that an artist, a media studies lecturer, a political analyst and a constitutional law expert would agree on anything. But, at a recent panel discussion at UCT on the furore caused by Brett Murray's painting The Spear, they were unanimous: the only way to deal with this is to talk about it in an uncensored and free manner.

Chairing the discussion, deputy vice-chancellor Professor Crain Soudien said that, more than anything, the painting brought "all of our complexities to the fore and put them on the table," and that it put the country's "isms" '“ racism, sexism, etc '“ up for discussion.

Professor Pierre de Vos, constitutional law expert in the Department of Public Law, opened the discussion saying that, irrespective of the matter, he would always side with freedom of expression.

Dr Musa Ndlovu, of the Centre for Film and Media Studies, reiterated that "the humiliation of black bodies is real, relevant and raw". That said, he maintained that the independence of the media and artists should not ever be coerced.