UCT's Celebrating Africa Month may have headed down the home straight in the second half of May, but its momentum never flagged. Here we condense in photographs the talks, launches, sharing and exhibitions that made up the latter end of the month-long commemoration. 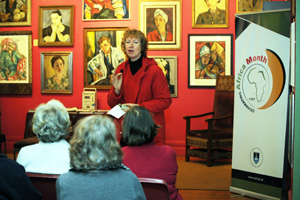 On International Museum Day (this year marked on 18 May) Mary van Blommestein, curator at the Irma Stern Museum, organised a tour of artworks – "with a specific reference to African artwork" – found on the UCT campuses. 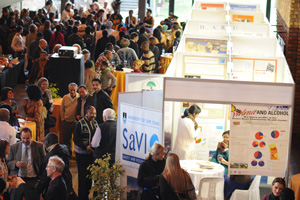 An exhibition highlighting UCT's involvement with the rest of the continent drew many visitors. 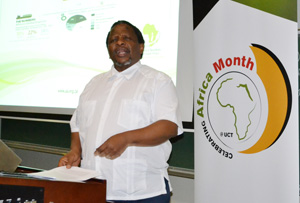 On 15 May, the Faculty of Engineering and the Built Environment hosted Dr Matlotleng Matlou, chief executive officer of the Africa Institute of South Africa, who spoke on the African diaspora and the role its members can still play on the continent. 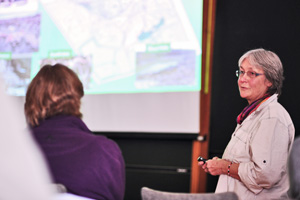 Also on 21 May, Dr Pippa Haarhoff of Iziko Museums of Cape Town, and more topically, the West Coast Fossil Park, gave an overview of the famed fossil site in Langebaan. 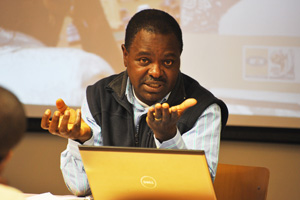 On 21 May, Prof Francis Nyamnjoh, head of social anthropology in the new School of Gender and African Studies, Anthropology and Linguistics, spoke about how social transformation in Africa is associated with cellphones. 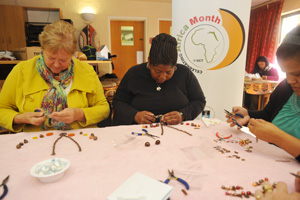 Pliers, wire-cutters and steely-eyed determination were out in force on 22 May as staff got to grips with African beading techniques at a workshop jointly hosted by the International Academic Programmes Office (IAPO) and the Human Resources Departme. 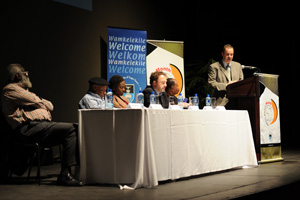 African Culture, Human Rights and the Constitution was the topic disputed at a panel discussion on 24 May. The marquee event of the month, the discussion involved panellists Prof Salvatore Mancuso, Dr Sindiso Mnisi-Weeks, Prof Pitika Ntuli, Prof Kwesi Prah and Prof Tom Zwart, and was chaired by deputy vice-chancellor Prof Thandabantu Nhlapo. 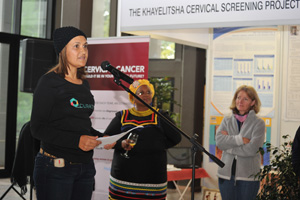 Africa Month served as a backdrop for the launch of the Curate Africa project, headed by Siona O'Connell and forming part of UCT's Centre for Curating the Archive. Curate Africa aims to create a collection of thousands of photographs, taken by people across Africa, which capture everyday life on the continent. 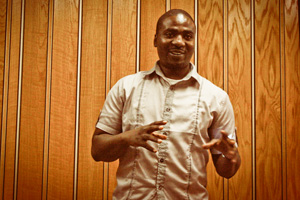 At a seminar on 16 May at All Africa House – the residence set aside for hosting visiting scholars from other parts of Africa – residents and other participants revealed how their initial fears about UCT turned into pleasant surprise after their arrival. 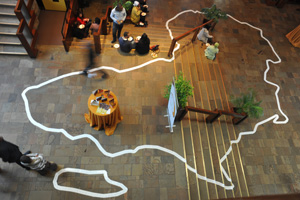 The closing of Africa Month was a memorable occasion.