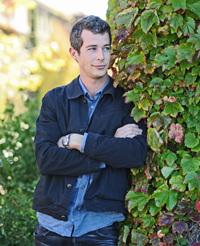 Leader of nations: Erik de Ridder will lead a simulated chamber of the UN at a major youth summit in the US.

To say that UCT's Erik de Ridder has the world at his feet would hardly be an exaggeration.

After a tough international '“ and open '“ selection process, the final-year engineering student has been appointed as the secretary-general of a simulated chamber of the United Nations (UN) that will participate in the 2012 G8/G20 Youth Summits in Washington DC in June.The annual summit gathers some of the brightest young minds from these countries (plus an international delegation) to craft a vision for addressing key contemporary issues.

The secretary-general role is part of the cluster of international organisations and countries comprising the international delegation, which De Ridder has also been assigned to lead.

"My role is to represent the 173 countries that are not represented in that forum, as well as the mission of the United Nations," he explains.

As the G8 and G20 have historically been criticised for perceived elitism and for excluding the rest of the world from key economic and political decisions, De Ridder will have an important part to play.

Agenda items for the 2012 summit include the future of global governance reform and innovation, universal economic and political accessibility, especially among the youth and promoting peace, and security for a prosperous society.

"From my side, some of the key issues include the innovation of global governance," he explains, "as well as looking at making these types of informal platforms more representative; so bringing in more countries, not only those that are defined as 'economically significant'."

Also on the table are the eight Millennium Development Goals, which all 193 United Nations member states and other organisations have agreed to achieve by 2015, a date creeping every closer. "The obvious important thing is for us to work on a new compact," says De Ridder.

It's the first time De Ridder has taken part in an event of this scale. He did, however, speak at the Brand Africa Initiative conference in Johannesburg last year, an event that was broadcast to over 40 countries around the world.

The ambitious De Ridder is no stranger to leadership roles, having served on the Students' Representative Council in 2010, and proved his academic credentials by making the Dean's Merit Honours List for three years. Along the way, he has stockpiled a number of top awards, including the GCI Sustainability Award and the UCT Executive Director Student Leadership Award (both in 2010), and the Abe Bailey Travel Bursary last year.

This impressive track record, plus equally impressive showings in the application and interview processes (he competed against hopefuls from 22 different countries), landed de Ridder the prestigious roles at the Washington summit.

He has high hopes that the conference will bear tangible fruit.

"Why I'm particularly excited about this '“ and why I decided to participate '“ is that it's not just a simulation," says the soft-spoken de Ridder. "It's not a model. It follows the same structure, it follows the same processes and has real, consequent outputs that are communicated to all participating governments and international organisations."