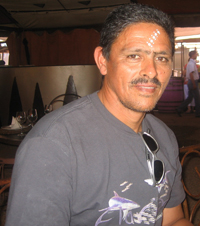 Herbert Hindley, a staff member with the Projects and Maintenance unit in the Properties and Services Department, died in a car accident on 8 April.

Herbert, known as 'Herbie' around campus, joined UCT in 1982 as an assistant to the kitchen fitter in the upper campus maintenance section. After a restructuring exercise, he joined residence maintenance.

Because of his friendly nature, he slipped easily into the university community, becoming friends with colleagues and clients alike. He certainly did not buckle under pressure and took what was thrown at him, and seldom complained about the stress. He was considered to be a meticulous worker, very precise and well presented. Nothing gave him more satisfaction than finding a solution for completing a job to the best of his ability.

Herbert was a dedicated family person and always involved in church and community work.

He will be missed by the department and clients due to the pivotal role he played in the day-to-day operations of the commercial kitchens at UCT.

A Memorial Service was held on 12 April at Rochester Hall, and was attended by over 200 people, which included his immediate family, friends and colleagues.

Ed Chihambakwe was a lecturer in actuarial science in the Faculty of Commerce up until the end of 2011. On 13 March he was thought to have been caught in a riptide in the sea off the KwaZulu-Natal South Coast. The National Sea Rescue Institute was unable to recover his body, and Chihambakwe is presumed to have drowned.

Chihambakwe grew up in Zimbabwe, graduated from UCT with a BSc in actuarial science in 2001, and subsequently qualified as an actuary. He moved to Cape Town at the beginning of 2010 to take up an academic post at UCT.

He was unmarried and did not have children.

With thanks to Shivani Ramjee, School of Actuarial Science.