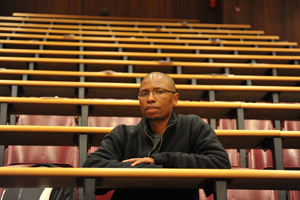 Lightning doesn't strike twice, they say; unless you're Leonard Molefe.

While doing his master's degree a few years back, Molefe's supervisor resigned, leaving him treading water for six months. However, a year later he was awarded his dissertation with distinction.

More tragically, Molefe was halfway through his PhD studies when his supervisor, the late and much-beloved Associate Professor Kevin Rochford, was killed.

The loss of Rochford hit particularly hard. "It was so painful," Molefe recalled.

But Molefe found solace in two publications he completed with Rochford - part of the preliminary studies that framed his PhD study.

He rallied, and the painful experience has taught him a few valuable lessons about his own resilience.

Molefe, a former life sciences educator, graduates this week with a PhD in science education. His groundbreaking research, A Study of Life Sciences Projects in Science Talent Quest Competitions in the Western Cape, South Africa, with special reference to scientific skills and knowledge, investigated whether the Eskom Expos for Young Scientists allow participants to develop scientific skills and life sciences knowledge.

As his was an in-depth study, he also explored factors that shaped the students' participation in the expos.

The study comprised five grade 10-11 learners from three schools in the Western Cape. These cases were selected from a pool of learners who showcased their projects at the two main exhibition venues in the province in 2007.

"They are participating in the Science Expo, but are they meeting requirements stipulated in the life sciences curriculum?" he asked. "Are they able to conduct research projects, do they develop new Life Sciences concepts, and are they able to construct scientific knowledge that is practical for our everyday life and that can solve problems in South Africa?"

Molefe followed the learners who had done well in the competition, one even winning an international contest.

Although the results showed the learners' shortcomings in relation to their performance in regard to certain science process skills, Molefe found the learners' critical inquiry, reflection, understanding of Life Sciences concepts and processes and their application in society "impressive".

"They were able to plan, to raise questions, to observe, to measure, to interpret data, to communicate scientific information, and to hypothesise."

Molefe noted that support structures were critical for the success of the learners.

Those who did best in the competition came from schools that were well-resourced, they had experienced teachers and science experts, and their parents were involved.

"We often overlook the power of parents in education," Molefe says.

The important thing, he adds, was that the participants loved science and recognised the role of science in their lives and in society in general.