It's a gut feeling 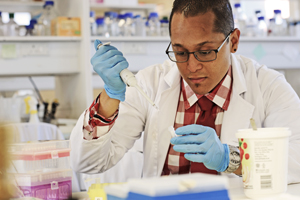 Caution ahead: Clinton Moodley's doctoral work suggests that prudence should be applied in the use of probiotics, as certain stomach bacteria can build up resistance to drugs.

A hardy bacterium found naturally in the gut - and usually considered quite useful - has developed or recruited mechanisms which have made it resistant to certain drugs, says a UCT PhD graduand.

As a gut bacterium, Bifidobacterium longum plays a host of useful roles, including boosting the immune system, degrading certain toxic compounds and repelling certain disease-causing bacteria in the gut, explains Clinton Moodley, who graduates this week with a PhD from the Department of Molecular and Cell Biology. B. longum is therefore much-beloved by the pharmaceutical industry, which uses it as a probiotic supplement (so called because these live organisms are thought to be beneficial to the host organism); while the food industry harnesses it as a food additive in yoghurts and the like.

The problem is that the hosts (human and animal) have been exposed to antibiotics over their lifetimes. To survive those antibiotic doses, B. longum has developed or recruited drug-resistance genes, in the end becoming resistant to many of these antimicrobial compounds.

"This provides these bacteria with a competitive advantage during periods where the host is treated with antibiotics for bacterial infections, since these beneficial bacteria are able to survive and also continue conferring their health benefits at times when they would be most needed," says Moodley, now a medical research scientist at the National Institute of Communicable Diseases at Groote Schuur Hospital.

Adding this bacterium to food or using too many probiotic supplements during antibiotic therapy, thus triggering the expression of such drug-resistance genes, may not be the wisest thing to do, he cautions. Consume the bacteria in large numbers, and there's an increased risk that it could pass on the drug-resistance genes to other bacteria in the gut.

For example, Moodley has found that when these 'ABC-type multidrug efflux genes' - genes involved in mechanisms that are used by cells to expel toxic substances - were expressed in a very close relative to B. longum, that bacterium also acquired drug-resistance capabilities.

In his study, Moodley also identified a series of genes that may well be regulating these drug-resistance genes. While they have been studied in other bacteria, Moodley is the first to find these regulatory proteins - which typically regulate other multidrug-resistance genes - in B. longum.

But all may not be lost, says Moodley, since B. longum can now survive antibiotic treatment, and it is able to continue providing its health benefits during disease. However, feeding more of this bacterium into the gut could pass on the drug resistance to other bacteria.

"Our research merely suggests that caution be exercised when prescribing probiotics, as well as limiting their use in the food industry, since there is a small chance that these genes may be transferred to other bacteria. It may be prudent rather to screen these probiotic cultures for drug-resistance genes, and then select only those which are limited in the scope of their drug resistance."

Moodley's work has also provided insights into the working of the ABC-type multidrug efflux systems mentioned above. These efflux systems are problematic for cancer treatments as they are used by certain cancerous cell lines to pump out chemotherapy drugs, and so become resistant to chemotherapy.

By getting to grips with the mechanisms that bacteria use to build up their drug resistance, it may well become possible to design new antimicrobial compounds that could circumvent or suppress the expression of drug-resistance genes, opening the door to new therapies.