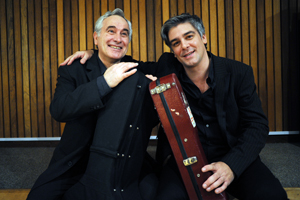 Magnum Opus, a series of three concerts organised by head of classical guitar studies at UCT's South African College of Music, James Grace, under the umbrella of his record label, Stringwise Records, proved to be a hit.

Tickets sold out for the performance by Italian guitarist and professor of guitar at the Rossini Music Conservatoire in Pesaro, Italy, Giuseppe Maria Ficara (left in picture, with Grace), who kicked off the trilogy on 4 April.

Seats were similarly hard to find for the follow-up performance by Goran Krivokapi?, lecturer at the prestigious Koblenz International Guitar Academy in Germany, on 18 April.

Grace will end the series on 25 April with his favourite pieces, including a version of Abdullah Ibrahim's The Wedding.