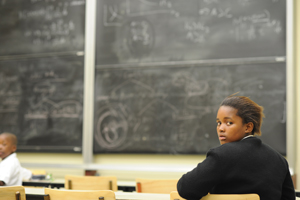 Brainteasers: Learners like Elihle Kabalaza of Iqhayiya Senior Secondary School, Khayelitsha, had plenty to think about.

A record number of 8,312 grade 8 to 12 learners from 153 Western Cape schools signed up for this year's UCT Mathematics Competition, which took place on 16 April.

The learners were split into 63 venues around campus where they set about the 30 questions (ten easy, ten head-scratching, ten tough) that each grade had been assigned to tackle in 75 minutes in their respective papers.

This year, over 500 learners from Khayelitsha alone - another record - took part in the competition. That was thanks to the efforts of the Schools Improvement Initiative, who bussed in the kids from the community's 20 schools, all part of UCT's 100-UP programme.

The results will be announced on 7 June. Sponsors for the event are Capitec, Aurecon, Casio and Oxford University Press.