Conference leaves delegates all jazzed up 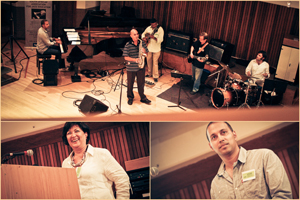 UCT's Lower Campus was, pardon the expression, rocking, as the 11th South African Association for Jazz Education (SAJE) Conference descended on the university at the end of March.

The three-day international conference, held from 25 until 27 March at the South African College of Music and the Baxter Theatre Centre, was crammed with presentations, film screenings and, of course, concerts. It is the only official gathering of its kind in Africa.

With delegates from no fewer than four continents attending, SAJE treasurer and conference organiser Diane Rossi says the conference provides a platform for learning and networking.

"That's what music does," says Rossi, "and especially jazz. It's a universal language."

Cape Town has hosted the past three editions of the conference, held every two years. Which leaves one wondering what makes the Mother City so attractive.

"I think in terms of the music department here, the jazz department, it's the most prolific in the country," Rossi explains. "The students here win most of the national awards. Also, we have good organisers."

Rossi can't quite put her finger on it, but says that besides the allure of musical excellence, Cape Town just has that something special as a jazz mecca.

"I don't know what it is! Cape Town is just– We have a very rich and diverse jazz and cultural heritage here, and people like that."

Among the headline acts were three sons of jazz legend Dave Brubeck - performers in their own rights - in town to answer questions after the local premiere of In His Own Sweet Way, a documentary on their father executive-produced by long-time jazz aficionado Clint Eastwood.