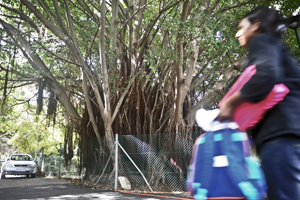 Imagine the ruckus when Educare's kids found out there was a giant on the playground. And the kerfuffle that followed when they were told that this live-in giant is the giant of all giants.

This granddaddy of Educare - a century-old Australian Banyan tree - has been selected as one of South Africa's champion trees, making it one of only two Banyans on this 'biggest' list. It measures in at 17.5m high, and boasts a circumference of 13.59m and a crown diameter of about 35m.

It was Rethea Deetlefs, head of online communications at UCT and self-confessed tree hugger, who alerted the record-keepers to the Banyan's stature. Deetlefs initially approached the Dendrological Society of South Africa to find out if they had the tree on their radar.

A few meetings and a visit to the tree later, and it was shortlisted by the Champion Tree evaluation panel.

The Champion Tree initiative, managed by the Department of Agriculture, Forestry and Fisheries (DAFF), identifies potential canopy kings by size, width and historical value. Only a few make the cut, but it comes with special privileges.

"Once declared a Champion Tree, such a tree may not be cut or damaged without a licence," says Izak van der Merwe of the DAFF.

"I'm tickled pink to know that I made my little contribution," Deetlefs smiles.