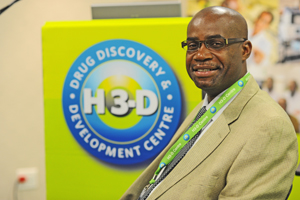 UCT's Alan Pifer Award comes with some exacting demands. According to the adjudicators, the work of 2011 recipient Professor Kelly Chibale on drug discovery in Africa has surpassed those criteria.

In addition to contributing to the advancement and welfare of the disadvantaged, as the award stipulates, Chibale's research - on potential drugs for diseases such as malaria and tuberculosis - also shows that science is not just an abstract discipline, as some may believe, but is very relevant to solving some very human problems. And contrary to the accepted Afropessimism, he's proven that, with the right support and infrastructure, researchers in Africa are more than a match for their peers in Europe and North America.

"With our new, unique model of drug discovery, we've shown that good science can be produced in Africa," boasts Chibale, director of UCT's Drug Discovery & Development Centre, or H3-D. "Through this project, we are creating opportunities and jobs for people from the UK and the US to come and work here."

In the motivation provided as part of the nomination by the former Head of the Department of Chemistry (Emeritus Professor Allen Rodgers) for the award, worth R10,000, Professor Susan Bourne, the new head of the Department of Chemistry, noted that the aim of Chibale's H3-D "is nothing less than to create a mass of African scientists with the skills and capacity to develop pre-clinical drug candidates, with a focus on the diseases afflicting sub-Sahara Africa".

At the award-presentation ceremony in March, Professor Danie Visser, deputy vice-chancellor responsible for research, explained that the Alan Pifer Award meets a strategic goal of promoting socially responsive research at UCT. Chibale is the 19th recipient of the award, named after the late philanthropist, erstwhile president of long-term UCT benefactors the Carnegie Corporation of New York, and founding chairperson of the UCT Fund.