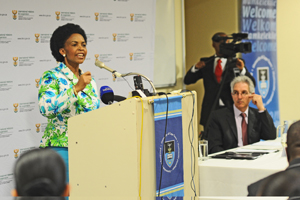 Minister Maite Nkoana-Mashabane made no bones about the purpose of her lecture at UCT on 6 March - to offset some of the Afropessimism so common in the country.

So in her lecture, titled Celebrating the Legacy of Liberation Movements in Africa: Freedom through diplomacy, Nkoana-Mashabane, minister of international relations and co-operation, took the audience on a trip back into Africa's diplomatic past. Codified it may have been in Europe, but diplomacy is not a European invention, she argued.

It's even older, Nkoana-Mashabane added, than the African National Congress, founded as the South African Native National Congress in 1912 and which has played a leading role in diplomacy on the continent for the past 100 years. Rather, she turned the clock back to the 1600s and the "first three diplomats of the liberation struggle in this country" - the three Khoi (Autshumao, aka Herry; Krotoa, aka Eva; and Doman) who acted as interpreters between their own people and the early Dutch settlers.

Since then, liberation movements like the ANC - "a force to be reckoned with in the international arena" - and others have played a defining role in diplomatic practices in Africa and further afield, said Nkoana-Mashabane.

Yet despite this long tradition and the opportunities now opening up in Africa, many South Africans remain despondent about the future of the continent, said the minister. She encouraged the audience to embrace the continent and its possibilities.

"South Africa has a leadership role to play in removing pessimism against our mother continent," she said. "This responsibility has been bestowed on us by history."

In thanking the minister, Vice-Chancellor Dr Max Price spoke of how this vision fits in with UCT's own Afropolitan ambitions to create generations of graduates "with a deep familiarity of the continent and its peoples".