Ikeys back in business! 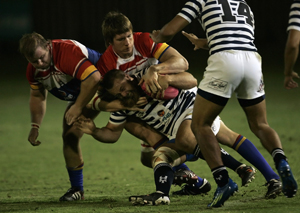 Gripping stuff: UCT's Dayne Jans is tackled by Zandre Grobler and JJ Breett as the Ikeys recorded their first win of the 2012 FNB Varsity Cup.

It took them three games to clock their first win, but the UCT Ikeys blasted their way back into semi-final contention when they demolished Tshwane University of Technology (TUT) 66-2 in their 2012 FNB Varsity Cup clash in Tshwane on Monday night.

Apart from being a welcome fillip, the massive win sets UCT up nicely for a charge at a sought-after semi-final berth. The five points leave Ikeys in sixth place, but just one adrift of fourth-placed Shimlas (University of Free State) and fifth-placed Pukke (North-West University).

University of Pretoria and University of Stellenbosch currently occupy the home semi spots with 14 and 13 log points respectively, with a tantalising clash between them looming in round four. The University of Johannesburg is third on 10.

Kevin Foote's men made up for a sluggish start in the competition by running in nine tries against the Varsity Cup's cellar dwellers to clinch the only away victory of the third round. Ikey wing Mark Winter went over within a minute to set the tone for a merciless assault on the TUT defence.

Flyhalf Nicholas Holton's conversion was the first of seven as the playmaker continued his impressive form. Another major boost for the Ikeys was the return of South Africa under-20 scrumhalf Ricky Schroeder. The dynamite No 9's 35-minute second half cameo was his first outing since breaking his leg in training last season, on the eve of the announcement of the Baby Bok squad.

But it was rampaging No 8 Rayn Smid who stole the show in white and blue. In only his first Varsity Cup start, Smid laid waste to the Vikings with a phenomenal four tries in the second half.