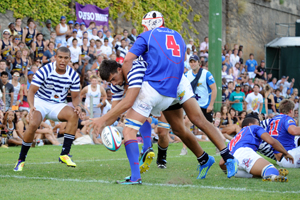 Fumble: All too often, UCT's handling - with the goal line beckoning - let the side down.

FNB UCT's title defence got off to the worst possible start with a 10-38 loss to the University of the Free State's Shimlas in the opening round of the 2012 Varsity Cup on Monday, 6 February.

The Ikeys were punished for a litany of missed chances and unforced errors as the players from Bloemfontein outscored them by four tries to two. The home team seemed to be its own worst enemy on an unusually windless Green Mile.

Despite creating several clear scoring opportunities, UCT's pack were outgunned in the set-pieces and tight-loose, forcing the team onto the back foot. The visitors had raced into a 16-0 lead before UCT finally troubled the scorers through fullback Dillyn Leyds, who finished an expansive move in the corner.

UCT conceded a further 14 points before they scored again, but captain Ntsolo Setlaba's five-pointer came when the match was already lost. Kevin Foote's team rued twice dropping the ball with the try-line at their mercy.

Ikeys flyhalf Nicholas Holton, one of the few in blue and white hoops who caught the eye, saw his expertly crafted opportunities squandered by team-mates far too often. Foote was crestfallen.

"Our handling was just atrocious, and we couldn't get through any phases," the coach said.

"We're better than that," he said, adding that the next game against the University of Johannesburg was crucial. "We have to fight for our lives going up to Johannesburg. If we don't, then this campaign is going to finish before it's even started."