UCT wrapped up its December 2011 graduations with four ceremonies over Friday and Saturday, 15 and 16 December. 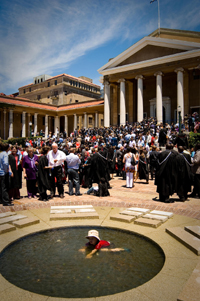 Amid the pomp and the ceremony, there were other celebrations. UCT academics and husband and wife Dr George Vicatos and Evelyn Vicatos, both of the Faculty of Engineering & the Built Environment, replayed a scene that's become a hallmark of UCT graduations when they hooded their daughter, Giselle, who picked up her BSc degree on Friday. (Brother Alexios, who has just finished the first year of his science degree, joined the rest of the family for the celebrations.)

And, as is typical of the occasion, a few always push the envelope when it comes to marking the moment. But few pushed further than three-year-old Michael Foster, at UCT with his mother, Nicola Foster, who received her Master of Public Health in health economics on Saturday, 17 December.

The day proved particularly sweltering, so Michael found a way to cool down. He went for a dunk in the water feature - aka Bruce Arnott's The Oracle - on Jammie Plaza.

In Michael's defence, a write-up for the piece says that the work's disc shape can suggest a children's game.