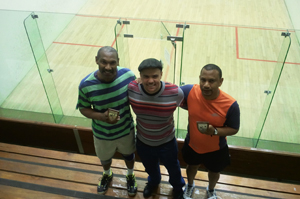 It's well known in sporting circles that UCT staffers are enthusiastic squash players.

But apparently those players surnamed Williams who are also affiliated to UCT Libraries rule the roost.

At the end of the three-week competition, it was Johnathan and Russel Williams - no relation, as far as we could determine, but both of the Chancellor Oppenheimer Library - who walked off with the silverware.

In the bronze section, Russel got the better - by 2-0 as well - of Carl Herman, director of the Admissions Office and a late replacement for Student System and Support's Jeffrey Thurtell, who had to pull out of the competition.

In picture (from left), Johnathan Williams, Buckton and Russel Williams celebrate the moment.