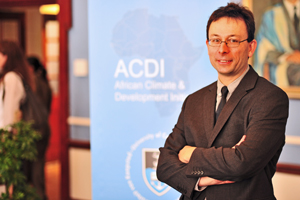 "The 17th Conference of the Parties (COP17) to the United Nations Framework Convention on Climate Change (UNFCCC) and the 7th Session of the Conference of the Parties serving as the Meeting of the Parties (CMP7) to the Kyoto Protocol, will be held in the sunny city of Durban, South Africa." That, per the COP17 site, sums up what's going to happen in Durban from 28 November to 9 December. More or less. It doesn't perhaps capture the layer upon layer of meetings, talks, negotiations, side events, fringe events and the like that will transform the city over the two weeks. (Some meetings start even earlier than the 28th.) As usual, UCT will have its own contingent there. Some in official capacities, others to observe and chronicle. UCT will have an exhibition stand of its own as well, showcasing its African Climate and Development Initiative and affiliated units, departments and individuals.

Professor Mark New, UCT's pro vice-chancellor for climate change and director of the university's African Climate and Development Initiative, or ACDI, is clear about his expectations:

"The Kyoto Protocol second commitment period needs to be rescued, as this is the only working example of an international emissions agreement, albeit limited to a subset of developed countries. This requires developed countries such as Japan to give ground and agree to a second commitment period, but it would really be 'lubricated' if big emerging-economy emitters such as China and India agree to a reasonable timetable for them becoming part of a formal emissions reduction treaty.

"For Africa, and South Africa, agreement on the Green Climate Fund is critical, as without this, low-carbon development will be very difficult, and Africa could follow the business-as-usual fossil fuel energy pathway."