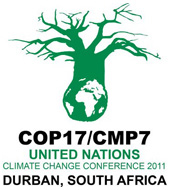 Thousands are swarming to Durban from across the globe for the 17th Conference of the Parties to the United Nations Framework Convention on Climate Change, or COP17, which starts on 28 November and runs until 9 December. These delegates will have plenty to talk about. Here, from UCT's Energy Research Centre blog, we borrow bits and pieces of an unofficial glossary that might come in handy for the uninitiated. (We've even pinched the title.) See the full glossary.

G77 - Group of 77. Founded in 1967 under the auspices of the United Nations Conference for Trade and Development (UNCTAD); seeks to harmonise the negotiating positions of its 133 developing-country members.

GWP - Global Warming Potential. An index that allows for comparison of the various greenhouse gases. It is the radiative forcing that results from the addition of one kilogram of a gas to the atmosphere compared to an equal mass of carbon dioxide. Over 100 years, methane has a GWP of 21 and nitrous oxide of 310.

KP - Kyoto Protocol. An international agreement adopted by all Parties to the Climate Convention in Kyoto, Japan, in December 1997. Not ratified by the US.

PAMs - Policies and measures. The promotion of renewable energy, energy efficiency, forest conservation, or other actions for the reduction or limitation of greenhouse gases or for sustainable development (to be implemented by Annex I Parties under Article 2.1 of the Protocol).

REDD - Reducing emissions from deforestation and degradation in developing countries.