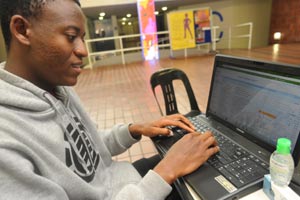 Persistent: Ludwick Marishane has never given up on the plan to get his cleaning lotion onto the market, and is building hard-won networks.

Latest update: A previous version of this story noted that Ludwick Marishane had been nominated to represent South Africa at the Global Student Entrepreneurship Awards in New York, US for his bath-substituting lotion, DryBath. We've just heard that Marishane has been named as the winner of this award.

In a competition that began with nearly 2 000 students from 42 countries, Marishane will share in the half million dollar prize pool of cash and in-kind business services, including a year of mentorship from Redbox founder, Mike DeLazzer.

Redbox is an American-based company that specialises in the rental of DVDs, blu-ray discs, and video games via automated retail kiosks. By In June this year, Redbox had over 33 000 kiosks in over 27 800 locations.

"Participating in the Global Student Entrepreneur Awards was a game-changing experience for my personal and professional growth, and winning is proof that crazy high school dreams can go on to bring about real change in the world," Marishane was quoted in a press statement.

For UCT student Ludwick Marishane, entrepreneurship comes naturally. His long list of achievements on the business front, achieved in a short space of time, speaks for itself.

In fact, the Limpopo-born, third-year commerce student came to UCT through an Allan Gray Orbis Scholarship after his business acumen was identified while still at high school. It was a sign of things to come.

Just recently, Marishane shared third place in the South African Breweries Foundation's inaugural Innovation Awards, pocketing a whopping R150 000 in prize money. This after he scooped no fewer than six local and international accolades, thanks to his lotion, DryBath, described as a "bath-substituting product", invented and held by his company, Headboy Industries.

DryBath is said to kill germs, moisturise the skin, and leaves a sweet scent after it has been applied.

DryBath has won Marishane the Audience's Choice and the Most Promising Young Entrepreneur Award in the Singapore Management University's Lee Kuan Yew Global Business Plan Competition in August; he was chosen as one of the 12 Brightest Young Minds in Google's Zeitgeist Young Minds Competition in May; he was named as a runner-up in the start-up category of the Cape Town Entrepreneurship Competition in March; he finished third in the UCT leg of the National Innovation Competition; and he was selected to represent South Africa at the Global Student Entrepreneurship Award event for two consecutive years. (He is attending the competition finals in the US in November).

These triumphs fit in well with Marishane's goals. But it's been a long haul for him and DryBath.

After initial approval for DryBath, Marishane sought funding from 80 local and international investors - all in vain. "They would tell me I'm either too young, the idea wouldn't work or the product will be too expensive for poor people," he explains.

That did not deter him, though, and he decided to enter a whole bunch of competitions to see if he could to fund the business with prize money. But more than just winning cash, the competitions have helped Marishane expand his networks, and that is beginning to pay off.

He reports that the Accor Hotel Group has agreed to pilot DryBath at their hotels in December to see how consumers respond. That may well land him his first big client. And if everything goes according to plan, DryBath could go on public sale next year.

His tips for fellow students with a head for business? Read, research, network, and accept failure.

"As long as you're failing, it means you're trying."