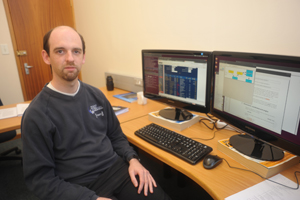 Getting with the program: Dr Bruce Merry has finished second in an international competition that pitted the world's best programmers against each other.

Narrowly missing out on the top prize to Japanese programmer Makoto Soejima, known in TopCoder circles only as rng_58, Merry beat off thousands of other contestants to snatch the $5 000 (just under R40 000) purse for second place.

The TopCoder Open pits computer programmers from around the world against each other in a race to solve various problems by writing the best codes in the quickest times.

In the algorithm section that Merry participated in, contestants were faced with three abstract puzzles, each demanding a swiftly-written programme to be cracked.

He was tasked with, among other brain-teasers, creating a program that would lay down parameters for the probability that contestants in a game of darts would hit the target.

Merry, based in the Department of Computer Science, is currently researching the potential of graphic processing units (GPUs) for general-purpose computing, and is also collaborating with the Department of Geomatics on African heritage projects.

Describing himself as "very happy" with what is his best placing in the competition since first entering it in 2001, Merry aims to go one better next year.

He admits, however, that the competition will likely become even tougher in years to come. He identified challengers from Russia and China, as well as a teenager from Belarus who is still too young to take part in TopCoder finals, as the main threats.