Honorary degree for Chair of Council 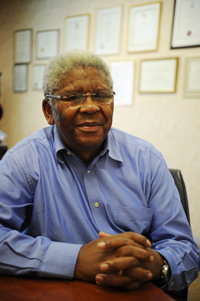 "This is in recognition and appreciation of his deep involvement in campaigns to abolish the debt of developing countries, combat poverty, tackle HIV and Aids, promote the Millennium Development Goals, and champion programmes relating to historic schools," said WSU spokesperson Angela Church. Ndungane was born in Kokstad in 1941.

The anti-apartheid activist graduated from Lovedale High School, Alice, in 1958. In March 1960 he was involved in anti-pass law demonstrations while a student at UCT. He was detained as a political prisoner and imprisoned on Robben Island for three years (1963 to 1966). On his release, Ndungane served a two-year banning order restricting him to the magisterial districts of Cape Town and Wynberg.

While in prison, Ndungane received a call to serve God in the ordained ministry. He was ordained as a priest in July 1974.