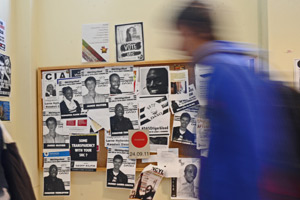 Three members of the current SRC structure, Insaaf Isaacs, Mike Ramothwala and Alexander Spoor have been re-elected. Objection to the results must be made by 12h00 on 27 September.

The election poll was 37% this year, slightly lower than last year's 38%, although a record 40 candidates took part.