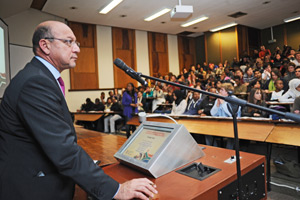 The chairperson of the National Planning Commission (NPC), Minister Trevor Manuel, called on UCT students to join "the cadres involved in problem solving" by taking part in the commission's brain-storming.

Addressing students at UCT on 15 September, Manuel noted that it was important to get more young people involved in planning the country's future as many of them would be in decision-making positions in years to come.

The commission, which is made of 25 part-time commissioners from diverse sectors such as the civil society, academia, and the private and public sectors, was appointed last year to eliminate poverty and reduce inequality by 2030. "In 2030 you are going to be at the right peak of what you're doing, and constructive links between now and the future becomes fundamentally important," Manuel told students.

But why will it take so long to address such pressing issues?

Quoting from the commission's diagnostic report, Manuel said the country is facing stiff challenges: a high unemployment rate of 41% (60% of those have never worked), a poor education system, a high disease burden, crumbling infrastructure, corruption, the uneven performance of public servants, a resource-intensive economy, spatial patterns that are still marginalising the poor and divided communities.

"Those are the nine challenges we believe are necessary to pay attention to in order to construct different outcomes that will focus on the elimination of poverty and the reduction of equality."

Manuel added that there is a significant shift in the world, with youth unemployment a growing trend even in developed nations. It is important when building a country to understand choices to be made on a wide range of issues and to include all South Africans in every decision, he added. "What we are asking is for young South Africans to seize the moment and make that investment for the future."

Students could take part in the commission's brain-storming by registering for its series of public discussions known as the Jam which will run from 28 September to 1 October. Students' Representative Council president, Amanda Ngwenya, said a session will be organised to give students an opportunity to give ideas on how to solve the country's problems. A collective report will then be handed to the commission.

While at UCT, Manuel also attended a seminar with academics, chaired by Professor Crain Soudien. The vice-chancellor, Dr Max Price, was also in attendance.