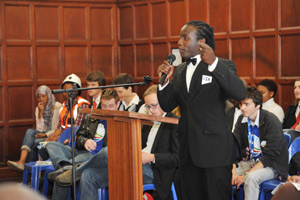 Campaign trail: Student Kwadwo Owusu was one of the SRC candidates who introduced themselves at the election launch.

One thing stood out at the launch of the 2011/2012 Students' Representative Council elections on 12 September: more and more students at UCT are interested in student governance.

No fewer than 40 students will this year vie for 17 seats (increased from 15 seats in accordance with the new SRC constitution) on the student body, up from 30 last year and 23 way back in 2007. (There have been promising increments in student voting).

"The large number of candidates is a clear indication that interest in student governance is alive on campus," said outgoing SRC secretary, Sean Darge. At the launch, candidates introduced themselves to a packed Molly Blackburn Hall, some resorting to humour, theatrical and even strong language to draw attention.

The launch was followed by the first of five scheduled question-and-answer sessions, held at Liesbeeck Gardens at 20h30 last night. Others will take place at the same time at Graa Machel Hall, at Rochester on 13 September, Forest Hill on 15 September and Clarinus on 16 September.

More sessions will be held daily during lunchtime, first at Medical School on 13 September, Kramer Building on 14 September, Hiddingh Hall and Upper Campus on 15 and 16 September, respectively.

Voting will take place from 19 to 23 September, and instructions for voting can be found on Vula.