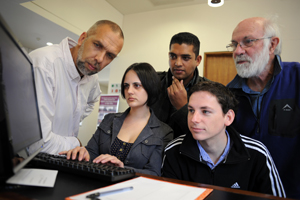 The story of the Antarctic and its surrounding islands is not just the account of an age of high adventure, teeming with bushy-faced explorers defying the elements, environmentalists keeping count of local fauna, or the occasional star-crossed expedition. There was also a lot of administration.

As revealed in the two digital databases unveiled at the 7th workshop of the history action group of the international Scientific Committee on Antarctic Research (SCAR), a meeting hosted in Stellenbosch at the end of July. These databases make up the (now) electronic annals of South Africa's role in the exploration of the Antarctic, the only African country to have been involved in the region.

The first exercise is the Antarctic Legacy Project, managed by Stellenbosch University's Centre for Invasion Biology. There, researchers have made large strides in building a digital archive of the anecdotes, letters, diaries, photographs and other records that tell the stories of South Africans who have worked on or visited the Antarctic and, notably, the two neighbouring Prince Edward islands - Prince Edward Island and Marion Island - since the turn of the century.

In turn, scholars and students from UCT's Department of Historical Studies and the Animal Demography Unit (ADU) have spent large parts of the past two years digitising the public records of the South African National Antarctic Programme (SANAP), overseen by the national departments of Science & Technology and Environmental Affairs and Tourism. The vast majority of these records - about 800 files comprising around 70 000 'pages', mostly dating from the 1960s and of an administrative nature - are kept at the National Archives Repository in Pretoria.

So the likes of ADU researchers Laura-Jayne Robinson and Alistair Glossop and Historical Studies' Thierry Rousset trekked to and from the repository (which keeps strict five-days-a-week hours), dutifully photographing each document, some quite fragile. These were then painstakingly catalogued and added to the growing SANAP library.

As with the Stellenbosch project, it's far from a complete archive. Countless more files and records are still held by other state departments, the military (hard to get at) and even private companies who'd been involved in SANAP projects, explains Historical Studies' Associate Professor Lance van Sittert.

Taken together, these two databases will, foremost, 'globalise' the South African Antarctic archive, says Van Sittert, making it available and accessible (it's online) to researchers across the globe. And it's attempting to tell thus-far untold stories, be they of coloured whalers of the bygone whaling era, or the growing number of South African women who have been taking their place at the research stations on the Antarctic and the nearby islands.

"We like to think of this as the first click in a quiet revolution," says Van Sittert.

Even more enthusiastically, the ADU director, Professor Les Underhill, describes the SANAP database as "historian heaven". "The job that these guys have done is so good," he says, "that you can see the texture of the paper, so it's almost as good as being in the archives."

"All from the comfort of your own home," adds archivist Robinson.