There was plenty to cheer about for the UCT cycling squad that took part in the University Sport South Africa (USSA) competition, hosted by the University of Johannesburg (UJ) at the end of June. Edward Greene (in yellow jersey in picture) won the men's three-day, five-stage road race; Sarah Bonner and Emily Clarke finished fourth and fifth, respectively, in their category; Greig Knox and Bruce Hughes finished first and second, respectively, in the men's mountain bike event; and Emily Clark won fourth spot in the women's mountain bike race. That was enough to earn UCT second place overall, just behind UJ, in the men's team event, while the UCT women finished second. UCT Sport & Recreation hosted its annual sports programme with 85 kids from Gugulethu, selected by the Amy Biehl Foundation. Over four days, sports administrators Peter Buckton and Karl Buckton introduced the kids, aged mostly 11 and 12, to the fundamentals of sports like basketball, hockey, soccer, rugby and volleyball. In addition to learning the basics of these codes, the programme also "keeps them busy", said Phumza Magwza, sports co-ordinator for the foundation. Lending a hand with the youngsters was 19-year-old German student Peter Düking, enjoying a stay in South Africa before he starts his studies at the German Sport University Cologne. 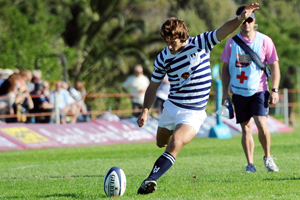 Demetri Catrakilis, top scorer in the 2011 FNB Varsity Cup - and arguably the reason UCT won the trophy this year - made his Western Province debut in the side's Currie Cup game against the Leopard in Potchefstroom on 22 July. The 22-year-old flyhalf had been whisked into the side in the place of Gary van Aswegen, the latest of five WP flyhalves to have succumbed to injury this season. Catrakilis wasn't overwhelmed by the occasion, scoring 22 points - five conversions and four penalties - in WP's 47-9 win. Vaal University of Technology (VUT) ruled the roost at the University Sport South Africa (USSA) volleyball championships, held at UCT in July. The VUT women beat their Tshwane University of Technology rivals by three sets to love in the women's final. UCT's women's team had to settle for fourth spot after losing to the University of KwaZulu-Natal 0-2 in the 3rd/4th place playoff. In the men's event, VUT cemented their institution's dominance, beating the University of Johannesburg 3-1 in the final. The UCT men didn't qualify for the knock-out stages of the tournament. But overall, the hosts didn't put up a bad show, especially as 2011 marked their return to the competition after an absence of some years.