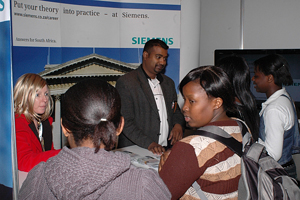 Good, better, best: UCT's Careers Fair was voted the best in the country in a recent survey of graduate employees.

For the second consecutive year, employers of university graduates have named UCT's Career Service and its annual Careers Fair as the best in the country.

This according to the South African Graduate Recruiters Association (SAGRA), which runs an independent survey of leading employers in South Africa. In addition, the SAGRA Graduate Recruitment Survey 2011 (based on responses from 81 of the largest and best-known graduate employers in South Africa) had some good news for university graduates as well, showing, for example, that these organisations are set to increase the number of graduate vacancies in 2012 by 7% compared to 2011. (Starting salaries are also set to increase; or, at the very least, stay at their 2011 levels.)

Recently treated to a makeover, the UCT Careers Service is based in the Centre for Higher Education Development, and provides a suite of services to UCT students. These set out to realise two main objectives: to strengthen the quality of UCT graduates and equip them to compete in a global workplace, and to help them make informed choices about their future.

Services fall into three categories: information, advice and opportunities. These would include the provision of anything from career magazines to personal action plans, CV review sessions to talks and workshops, and presentations by recruitment companies to the top-rated Careers Fair, where students can rub shoulders with potential employers.

"Employers said that UCT was very organised, and had a consistently high number of good-quality students coming through the careers fair," says Tim Wise, research director of High Fliers Research, the UK company that conducted the SAGRA survey. "They also said there was a great deal of support given by UCT, and that the team at the Careers Service was very friendly, efficient and supportive."