Staffers had Mandela Day in the bag 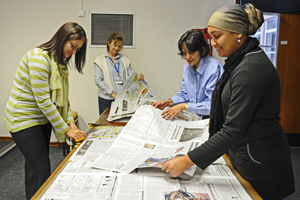 Wrapped up: Using a special technique, staffers in the Faculty of Humanities and Human Resources created sleeping bags for the homeless from newspapers and plastic sheets. Photographed here were (from left) Nurunisa Hendricks, Arddy Mossop, Charmaine van Kradenburgh and Karen Hendricks.

Like many institutions and companies countrywide, the UCT community participated in various outreach initiatives to commemorate Mandela Day on 18 July.

Inventor Jo Maxwell, creator of the Goodnight and God Bless Sleeping Bag, was on hand on 15 July to show UCT's Faculty of Humanities and human resources staffers how to fashion a sleeping bag out of plastic sheets, sticky-tape and many piles of newspapers, all gathered from colleagues in the Communication and Marketing Department. The end results were donated to the Claremont Night Shelter, in celebration of Mandela Day.

The Transformation Committee in the Office of the Vice-Chancellor prepared food to be distributed to children in Blikkiesdorp, near Delft, in collaboration with representatives from the community. And staffers in the Faculty of Law collected non-perishable foods for the Adonis Musati Project, which assists refugees and is named after the young Zimbabwean who died of starvation on the streets of Cape Town while waiting for his asylum papers.

"These are words we're well familiar with at UCT; they are borne out in our socially responsive research thrusts and through the work of our students in various volunteer organisations such as Ubunye and SHAWCO, which is one of the largest student volunteer organisations in Africa. I commend them for giving up 67 minutes today to make a difference to our communities in need."