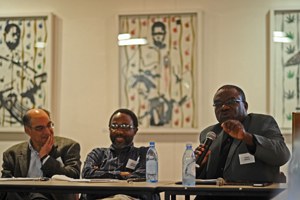 Reflections: (From left) Profs Fred Hendricks, Lungisile Ntsebeza and Jimi Adesina share some thoughts on the life and work of Prof Archie Mafeje.

As pointed out in the citation for the honorary doctorate awarded posthumously in 2008, and in the UCT statement and formal apology made to his family that year, Professor Archie Mafeje is still widely considered an influential scholar in African studies.

But, as raised at a recent conference hosted in his honour at UCT (part of the university's apology) Mafeje's scholarly legacy is still "deliberately ignored and marginalised by academics at UCT and elsewhere in South Africa", according to conference co-ordinator Professor Lungisile Ntsebeza of the Department of Sociology. It also became clear at the conference that many are still not satisfied with all aspects of the apology.

Firstly, as Professor Fred Hendricks of Rhodes University argued, UCT had inflated the perception of state pressure that led the university to back out of his appointment as senior lecturer in the Department of Social Anthropology in 1968. There were further snubs in the 1990s, when the university offered Mafeje a fellowship considered to be out of keeping with his seniority, and later did not appoint him to an advertised professorship, a process that led him to believe he had been treated unfairly.

Professor Jimi Adesina, also of Rhodes University, observed that universities were the cultural pillar of apartheid and colonialism, but did not have their day of reckoning, having passed on any blame - as in the case of Mafeje - to the state.

This discussion formed only the introductory part of the recent two-day conference. The bulk was dedicated to exploring Mafeje's scholarly legacy, including his work on the land question, gender issues, post-independence statehood and development.

Too often Mafeje has been used as "a symbol rather than as an intellectual", noted Ntsebeza. In the rest of Africa, Mafeje's work is widely respected and studied. Not so in South Africa.

"If people say they are taking his scholarship seriously, then where is the evidence? You look at the course outlines and who they prescribe, and if the name doesn't appear - and it doesn't, in many, many instances - then they are not taking him seriously."