Ikey Tigers in the book 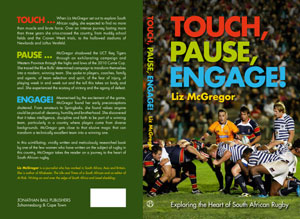 Heart of the matter: A new book takes the reader to the heart of South African rugby.

The better-known and behind-the-scenes facts about UCT Ikey Tigers' exhilarating campaign in the Varsity Cup have been laid bare in a new book, Touch, Pause, Engage. Written by veteran author and journalist Liz McGregor, the book, launched at the UCT Rugby Club on 8 June, is about the author's three-year exploration of South African rugby, from muddy school fields and the Craven Week trials to the hallowed stadiums of Newlands and Loftus Versfeld.

McGregor, who also authored The Life and Times of a South African and co-edited At Risk: Writing on and over the edge of South Africa, shadowed the Ikey Tigers as part of her investigation, and her book features a section about the club's 2010 campaign.

Pity, though, that she missed the winning 2011 one.