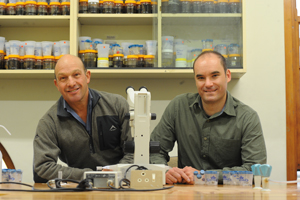 Discovering duo: Prof Mike Picker (left) and Dr Jonathan Colville have made entomological history again with their discovery of the world's first jumping cockroach or 'Leaproach', which features in the 2011 list of the world's top 10 new species.

When you discover the world's only known jumping cockroach, as UCT's Professor Mike Picker and former student Dr Jonathan Colville did, you naturally spend much time thinking of catchy headlines - such as the one above - to mark the event.

And it's time well spent, as this small cockroach certainly has been making headlines. Only this week, for example, it leapt into the Top 10 New Species for 2011, a much-vaunted list compiled by the International Institute for Species Exploration at Arizona State University in the US.

On that pick of new species, the leaping cockroach - or 'Leaproach', as Picker and Colville have named it - joins a leech with enormous teeth, an iron-oxide consuming bacterium discovered on a rusticle from the RMS Titanic, a flat-as-a-pancake batfish that appears to hop along the ocean floor, and a six-foot-long fruit-eating lizard. The list highlights the most exciting species described taxonomically in the previous year.

Picker, of UCT's Department of Zoology, and Colville, now with the South African National Biodiversity Institute, discovered the cockroach by chance (how else?) in 2006 while using a net to sweep vegetation - aka sweep-netting - for long-tongue flies in the sedge meadows of the Silvermine Nature Reserve.

From the moment they laid eyes on the funny-looking insect in their nets, the two knew they were onto something special. Measuring a modest one centimetre, the creature appeared to be a cross between a cockroach, a cricket and a grasshopper.

"Superficially it looked a bit like a cricket, but not quite," recalls Colville.

A careful microscopic examination back at their lab confirmed that the insect was in fact a cockroach - it boasted the broad, flattened body, the small head covered by the pronotal shield (or head shield), and very large leg bases that are typical of cockroaches. But it's easy to see why an untrained eye might confuse the insect with a grasshopper. 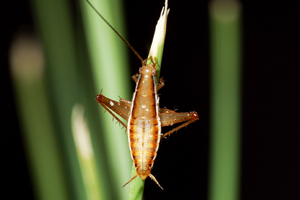 The jumping cockroach has distinctive, grasshopper-like features, many of which are probably adaptations for jumping. These include the enlarged and muscular hind legs, the hemispherically bulging eyes that allow for a wider view, rough-padded 'toes' for improved grip before and after jumping, and an especially strengthened base for the antennae, which stabilises them during jumping.

Surprisingly, it belongs to the same family as the common household German cockroach - although unlike the German cockroach it is active by day, living side by side with grasshoppers on grass stems.

Four years after their initial finding, Picker and Colville penned their first article on the jumping cockroach in a 2010 paper in the journal Arthropod Systematics & Phylogeny. There they officially named it Saltoblattella montistabularis. Saltoblattella is Latin for 'jumping small cockroach', while montistabularis refers to the site where it was first spotted, viz the Table Mountain National Park, to which Silvermine belongs.

"Thus far, it is only known from that single locality, adding to the impressive biodiversity profile of this World Heritage site," says Picker.

The two have also submitted a second paper, with colleague Malcolm Burrows from Cambridge University, which details the jump mechanics of this prodigious jumper. The Leaproach bears no resemblance to the only other assumed jumping cockroach ever found, the Late-Jurassic Skok svaba, whose 160-million-year-old fossil was first described in 2007. In their paper, Picker and Colville argue that the two insects' jumping adaptations most probably developed independently, especially since Skok was a stem 'roachoid' - an insect vaguely related to the cockroach and with a roach-like appearance - not on the main evolutionary line that gave rise to modern cockroaches.

There may well be other jumping cockroaches in the Cape, and for that matter in other poorly bio-prospected parts of the world. But Picker and Colville agree that their discovery points to how little is known about Cape fauna, which could even trump the plant riches of the celebrated Cape Floral Kingdom for scale and diversity.

"The Cape has a very spectacular and distinctive Cape insect fauna, which has been under-appreciated up until now," says Picker.

It's not the duo's only world first. They also discovered an entirely new biological order - a whole new kind of insect - known as Mantophasmatodea (or Heelwalkers) in South Africa in 2002.

They're hoping it won't be their last either.