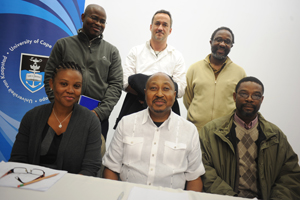 What is an African university? This is not a simple geographic question, as a panel discussion, hosted in celebration of Africa Day by acting vice-chancellor, Professor Thandabantu Nhlapo, demonstrated on 25 May.

The topic, The Study of Africa in the Postcolonial African University, was scrutinised, meta-analysed and even criticised by the five speakers in their presentations.

First to take the podium was Professor Lungisile Ntsebeza of UCT's Department of Sociology, who examined the issues and recent discussions surrounding the planned restructuring of the Centre for African Studies (CAS).

"Given the history of CAS, and the vice-chancellor's commitment to Afropolitanism, the possibility of closing the centre would seem to be a contradiction," said Ntsebeza.

Although a task team, led by Ntsebeza, proposed the opening of the New School of Critical Enquiry in Africa, Ntsebeza is wary.

"The current discussions on African studies at UCT are not addressing the issue," said Ntsebeza. "They are about setting up the school, but have not confronted the tough issue of what the intellectual business of the school may be, and how the school will address the issue of African studies."

Ntsebeza called for open discussions about the history of CAS and, in particular, the selection process for the late Archie Mafeje, who, after UCT retracted an offer of appointment in 1968, citing government pressure, applied for a post at UCT in 1993 but wasn't even interviewed.

Professor Adebayo Olukoshi, of the UN African Institute for Economic Development and Planning said that soon after independence, the mission, vision and identity of postcolonial African universities was a crucial debate.

But Olukoshi feels that the question whether Africa should aim for universities that are either global centres of learning, or locally embedded institutions, was a false debate.

Olukoshi argued that no university striving for internationalism can afford to ignore its immediate environment. "It is in its own environment that it begins to define its mission, its identity and its relevance."

Associate Professor Harry Garuba, head of UCT's CAS, divided the development of African studies into three overlapping phases. These are the 'area studies' phase, which was when Africa was studied from a distance by researchers on the outside, looking in at the continent. This was followed by decolonisation and its aftermath, during which there was a structural struggle in the humanities, as scholars found themselves unable to move away seamlessly from inherited structures.

Garuba's third phase is the present: globalisation. This is marked by internationalisation, and the impact of new technology on education.

"With globalisation, universities are no longer perceived as a public good, but more as an economic product." It's a situation Garuba describes as 'knowledge capitalism' - "which is as dangerous" as any other kind.

Garuba is wary of market-driven models of education, and corporations determining the financing of education. Big business, he feels, is more interested in "PowerPoint knowledge" than in-depth research - which can result in African studies being further marginalised.

"CAS is trying to address all these issues," said Garuba. "We prioritise Africa and seek solutions by creating a space where we can develop our own methodologies."

The difficulty in addressing the topic was a concern for Associate Professor Leonhard Praeg, a philosopher in the Department of Political and International Studies at Rhodes University.

"We have to work within a discourse which itself works against the very discourse within which we work," said Praeg. "This is a profound paradox, a tortuous contradiction - which creates a lot of tension."

Arguing that the division between "pre-" and "post-colonial" Africa was a temporal one when what was really needed was an epistemic classification, Praeg suggested that the topic's essential questions are firstly: what is the objective of producing knowledge on and from Africa today, and secondly, what institutional arrangement best reflects that objective?

"These questions compel us to reflect on our responsibility to our students and our disciplines, and on what being and thinking 'African' means," said Praeg.

Praeg also noted that the "sense of belonging" in Africa is being increasingly challenged by new communication technologies.

"We no longer see the nation state as our primary community," he said. "The nation state is being superseded by Facebook, Twitter and other forms of global interconnectiveness, with which we are building new super-national communities."

But what is African scholarship, really? This question, for Associate Professor Pearl Sithole of the Department of Community Development and Social Work at the University of KwaZulu-Natal, was the proverbial elephant in the room.

Sithole strongly believes in the existence, and uniqueness, of African scholarship, valuable in substance and application and not simply in existential or instrumental terms. She concedes that there is a lot of work that could mimic being African scholarship merely by virtue of it being done on the African continent and not because it has any unique epistemological contribution.

Sithole proposed that the expropriation of science by Western education, as if science itself is Western, is a fundamental mistake that leads to African knowledge being perceived as something other than science. She points out that subjugation to Western rating systems with their inherent bias makes such work all the more invisible as it is difficult to seek to be validated by the very hegemonies that one is critiquing.

"I suggest that the idea of indigenous African knowledge is not a manifestation of failure of objectivity. It is related to the stuff that we as scientists do not want to admit we don't understand, such as the existence of God."

Sithole argued that the "dry objectivism" of Western science and capitalist interest in pragmatic, profit-making learning have not only had a negative impact on African studies, but on the whole field of humanities.

The discussion went "smashingly", said Nhlapo after the event.

"I got the sense from the audience that they were reflecting deeply on what was being said.

"Every South African university wants to show a visible link with the African continent, and I think we should be happy with our own showing in this regard. If I have a task at all, it is to use events like Africa Day to demonstrate that we are already heavily embedded in the African situation, producing African knowledge, and celebrating it."

Listen to podcast of the event.

Working remotely: how to stay safe online In light of the COVID-19 pandemic and the subsequent national lockdown, UCT’s ICTS provides some handy tips to spot any potential cyberattacks while working from home. 01 Apr 2020

SHAWCO’s COVID-19 info and soap outreach Information and soap are precious commodities in townships in a time of COVID-19, and SHAWCO Health members went all out to distribute both before lockdown. 30 Mar 2020