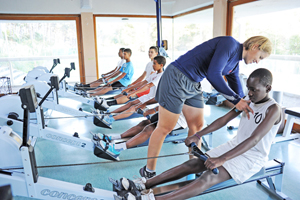 For some years now, UCT students have been generously volunteering their time and labour to the development programme of Western Cape Rowing.

That alliance dates back to around 2002 when former UCT facilities manager, the late Keith Hart, was appointed to the organisation's transformation and development portfolio.

This year the UCT Rowing Club goes solo (with some help from Western Cape Rowing). That's thanks to the over R551 000 the club received from the National Lottery Distribution Trust Fund in 2010, money earmarked for a three-year development programme to be hosted by the club. Most of the award went to the purchase of 20 rowing machines, or ergos, on which the beginner rowers are being introduced to the sport.

The learners will spend the first few months learning the sport's technical demands, and will likely only hit the water later in the year. (There are also swimming lessons before then.) 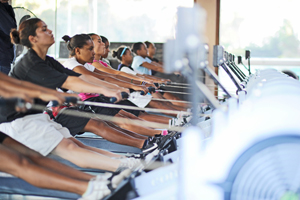 The university's students still chip in, as does Rika Diedericks, the former Olympian rower who now coaches the UCT women's first team.

It's not so much that the programme is designed to produce the next generation of South African Olympians, although it could. But it does fit in with the national drive to recruit more young rowers, especially black rowers, explains the rowing club's Kyle Hanck.

"The Department of Sport has tasked different sports to increase their development, and obviously that starts at grassroots level."

UCT students will obviously have to commit some time to the project, but it also requires commitment on the part of the learners.

"It's hard work, and it keeps you busy," says 14-year-old Tyron Losper, after one of Diedericks' lung-punishing routines. "We do it because we love it."