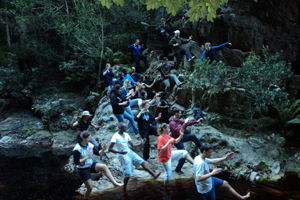 Twist and shout: Members of the UCT Tai Chi and Aikido clubs joined forces at a weekend camp in Betty's Bay.

Bounded by the Kogelberg Mountains and the Atlantic Ocean, the Disakloof Youth Camp in Betty's Bay was the perfect getaway venue for the 40 members who attended the UCT Tai Chi and Aikido camp in April.

The programme began at dawn on Saturday 16 April with basic stretching, then a practice in the fields, followed by meditation and a cross-practice with the Aikido club, which coach Peter Williamson referred to as "cross-pollination".

Sunday had the added feature of a nature hike and members conquered their fears and performed movements in water, on the rocks, and on logs.

"We learnt more about sinking, becoming humble, and, as the coach would say, 'letting go of bias, not fighting, nor giving in'," said Aditi Hunma of UCT Tai Chi.

Looking back, one member commented: "Tai chi has been an interesting journey thus far, filled with unco-ordinated flailing, pain in muscles I didn't know I had, and stretching into shapes I didn't know I could make! I've enjoyed it immensely."