Medal is master stroke for Mlambo 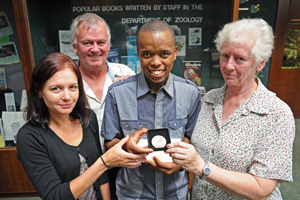 Musa Mlambo, a master's graduate from the Department of Zoology, has been named as the UCT winner of the 2010 S2A3 Bronze Medal.

The medal, sponsored by the South African Association for the Advancement of Science (S2A3), is awarded by universities around the country to the student whose master's thesis is considered the most outstanding produced by that university in a particular year.

Mlambo won the award for his 2009 thesis, titled Biodiversity Patterns of Wetland Macroinvertebrate Assemblages in the South-Western Cape, South Africa, a topic considered vastly understudied. For that project, Mlambo took samples from 140 wetlands in four geographic clusters - the Cape Flats, the West Coast, the Cederberg and the Agulhas Plain.

It turned out to be groundbreaking work, as he discovered no fewer than five new species of invertebrates - animals without a backbone - of which four are considered to be rare or unique.

Examiners and referees were nothing less than lavish in their praise. "I ... reckon the entire study to be the best scripts I have ever reviewed at this level," wrote one. "Rarely have I had the pleasure of examining such a stimulating, well-researched and extremely lucid piece of work," observed another.

Mlambo is currently doing his doctoral work at the University of Oulu in Finland.