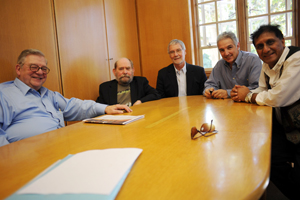 A recent series of seminars, workshops and conferences drew the world's who's who of human genome studies to Cape Town.

Among these were Sir Walter Bodmer and Professor Sydney Brenner, two of the most respected scientists in the field. Bodmer, a geneticist involved in the planning of the Human Genome Project, was appointed in 2005 to lead the People of the British Isles project, which sets out to examine the genetic structure of the population of the UK.

Brenner is the South African biologist who won the 2002 Nobel Prize in Physiology or Medicine for his work on Caenorhabditis elegans, a 1mm-long soil roundworm that he established as a convenient model organism for studying animal development. Both visitors were guests of the Joint Conference of the African and Southern African Societies of Human Genetics, hosted by UCT's Division of Human Genetics in Cape Town. Between meetings, the two also visited UCT as guests of Professor Raj Ramesar, chairperson of the conference organising committee. This allowed them to meet the vice-chancellor, Dr Max Price, among others. In picture above are (from left) Bodmer, Brenner, deputy vice-chancellor Professor Danie Visser, Price and Ramesar.