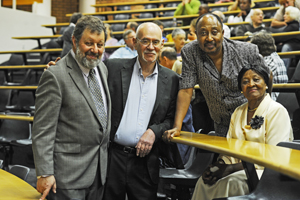 "It is from numberless diverse acts of courage and belief that human history is shaped. Each time a man stands up for an ideal, or acts to improve the lot of others, or strikes out against injustice, he sends forth a tiny ripple of hope, and crossing each other from a million different centres of energy and daring those ripples build a current which can sweep down the mightiest walls of oppression and resistance."

This is Robert F Kennedy's epitaph, and a quote from his now legendary 'Affirmation' speech in UCT's Jameson Hall on 6 June 1966. This landmark moment in the South African struggle for liberation has come full circle with a special screening of the new documentary RFK in the Land of Apartheid: A ripple of hope, which took place at UCT on 6 April.

Including previously unseen footage, the film documents the virtually unknown event of Kennedy's visit to South Africa, his speeches at a number of 'liberal' universities and his unprecedented visit to Nobel Peace Prize winner Chief Albert Luthuli, then under house arrest north of Durban.

"It's exciting to be screening the film where Kennedy gave the greatest speech of his life," says South African-born Larry Shore, who co-directed the documentary with filmmaker Tami Gold. "Kennedy challenged all South Africans to do their little bit, and the many thousands who did formed the non-racial movement."

Shore hopes the film will highlight the role played by those in the struggle who, he feels, are not given their due share, such as Luthuli, the National Union of South African Students, white South Africans and American anti-apartheid activists.

"It's important that people understand the full range of their country's history, as its misrepresentation can affect the way people act in the present," says Shore.

"Kennedy's message is as relevant today as it was in 1966," says deputy vice-chancellor Professor Thandabantu Nhlapo. "In a week in which we are celebrating the Constitution at UCT, coming on the back of events to commemorate human rights a few weeks ago, and while we look forward to an election and the celebration of our own Freedom Day before the month is out, this reminder of the importance of speaking out on fundamental values could not have come at a better time."