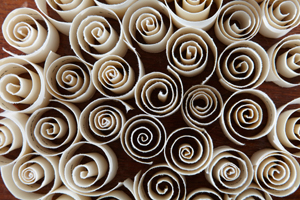 "As the name implies, the title denotes a notion of secrecy and the dislodging, or retching, of those things that choke us," said Niklas Zimmer, co-curator of the exhibition with Clive Kellner. "It truly is a salad bowl of works, representing 11 sets of very different concerns."

The themes draw on nostalgia; varying from femininity and eroticism and what's considered to be appropriate behaviour for a 'lady' (Ceri MÃ¼ller's works of phallic knitwear), to the effects of the notion of a double consciousness on the contemporary black South African within the post-apartheid context (photographic series by Mohau Modisakeng).

The idea here, said Zimmer, is to have art that is fresh and accessible to a new generation, while leaving plenty of room for interpretation. "You don't just make pictures of people. You don't just makes statements or tell people what to think about what you're doing here."

Heimlich Manoeuvres runs daily at Michaelis Galleries until 21 April and the gallery is open Tuesdays to Fridays from 11h00 to 16h00, and Saturdays from 10h00 to 13h00, excluding public holidays.