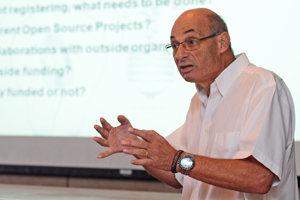 Professor Julian Kinderlerer, holder of the Chair of Intellectual Property Law at UCT, has been re-appointed to membership of the European Group on Ethics in Science and New Technologies (EGE), and has also been elected to a five-year term as the group's president.

The EGE is considered the most important ethics advisory body in Europe. Made up of 15 individuals, this independent, pluralist and multidisciplinary body advises the European Commission, the Council and the Parliament on ethics in science and new technologies related to community legislation or policies.

"The EGE members serve in a personal capacity and are asked to offer independent advice to the Commission," comments Kinderlerer.

EGE members are appointed on the basis of their expertise, and on a geographical distribution that reflects the diversity in the European Union.

The position allows Kinderlerer to influence official EGE Opinions and debates on legal issues in various fields of technology research and development.

In its last mandate, the EGE provided the commission with opinions on topics ranging from the use of cloned animals in food to the ethics of new developments in agriculture, from nanomedicine to synthetic biology. It will shortly begin looking at ethical issues resulting from information communication technologies and the need to ensure that ethical values are fully respected when developing security technologies.

In 2005, UCT secured a R3-million grant over five years from South Africa's Innovation Fund to establish the chair to which Kinderlerer was appointed. This was enhanced by funding from the Andrew W Mellon Foundation to set up, in parallel, an Intellectual Property Policy Unit, which Kinderlerer heads.