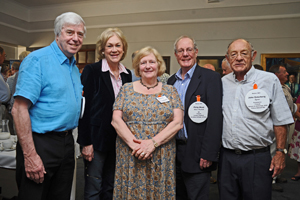 'Kopano' is a Sesotho word that means a place of unity, and Kopano Residence at UCT aims to live up to its name.

The residence boasts a diversity of students from all walks of life and in all academic disciplines and levels of study, said warden Professor Evance Kalula at the 50th anniversary reunion of Old Belsen Boys, named after the residence's original name.

"Despite many changes over the years, the values are still the same; we are still united and the strongest residence at UCT," Kalula said to the alumni who had gathered to mark the occasion.

The four-day event gave the group of 40-odd members - about 50% of the 1961 Belsen intake - an opportunity to meet up again with old buddies and tour the university. The reunion was organised by alumni Ken Price and John Osterberg.

The residence was originally named Belsen, after the Bergen-Belsen Nazi concentration camp in north-west Germany, as the residence initially housed students who had served in World War II. The name was changed to Driekoppen to mark the beheading of three slaves around the Mowbray area in 1724, but was changed to Kopano after 1994 as a celebration of unity.

Dr Stuart Saunders, one of Kopano's former wardens and former UCT vice-chancellor, is turning 80 this year, and the residence is using that occasion to bring back as many old boys as possible to support the residence.

Appealing to the old boys, vice-chancellor Dr Max Price said the number of students at UCT had increased five-fold over the past 60 years, and the university is under pressure from the government to take on even more students. A key constraint to growth is the lack of residences, and former residents were urged to assist where they could.

"Investing in residences is investing in transformation," Price said.